5 Scandinavian dress shoe brands you should discover this fall, according to the expert

”Today, there’s lots of great brands started by people in Scandinavia”, says Jesper Ingevaldsson, who runs one of the world’s biggest blogs for classic shoes as well as annual super trunk show events in Stockholm and London. He even arranges world championships contests in shoemaking, shoe shining and shoe patina.

Ingevaldsson started Shoegazing seven years ago, first in Swedish and then with an English version.

— I want to educate people about classic, welted shoes and have them understand the craftsmanship, materials and benefits in terms of durability and sustainability, he says. It’s been growing to something I could never have imagined, both in terms of readers on the blog, but also with the annual super trunk show events in Stockholm and London, world championships contests in shoemaking, shoe shining and shoe patina, a newly started podcast, and so on. I really enjoy it all.

The latest edition of the Stockholm event the other week was the sixth one there.

— Our focus is to introduce Swedish customers to new and exciting stuff not available here. This year we had CNES Shoemaker from Vietnam, Zeb Shoes from Croatia, Belgium/Spanish Sons of Henrey, and Norweigan shoe store Skomaker Dagestad. Oslo-based Dagestad is famous around the world for their wide range of brands, to Stockholm they brought Japanese Miyagi Kogyo, Foster & Sons brand new RTW range, and their own new premium brand Dagestad by Santari, which are handmade to extremely high standards in Tokyo. Apart from these the company I work for, Skolyx, also exhibited, plus Swedish companies Paul Brunngård, Blugiallo, and Granqvist. On stage we, among other things, had the Swedish Championships in shoe shining, where a shoe is to be shined as beautiful as possible in just 20 minutes. The winner was Johan Olsson.

The event attracted about 700 visitors. Mostly Swedish, obviously, but also people travelling in from neighboring countries, and from further abroad. Around 70 pairs of shoes were sold and the second hand marketplace Shoegazing Market, introduced last year, was once again a success.

— This event is just part of a greater whole. It’s quite interesting, that in Scandinavia we have two very mature and important markets for classic men’s shoes, also viewed in an international context, with Sweden and Norway, says Ingevaldsson, continuing,

— In Sweden, the revival of Goodyear welted shoes that has happened the past decades, started quicker than in many other parts of the world. This is much thanks to the wholesale agent of Crockett & Jones starting a collaboration with the Swedish cobbler’s association, making welted shoes easily accessible all over the country. When the interest in classic shoes and classic menswear boomed, a lot thanks to internet and social media, we had a head start, and today we have several Swedish brands, excellent stores and cobblers, and a large community around the topic. It says a lot that two of the largest UK brands of Goodyear welted shoes, Crockett & Jones and Loake, both have the small country of Sweden as one of their largest export markets.

— Norway is strong for different reasons. The country had a strong tradition of shoemaking 100 years back, and the interest in shoes have lived on. Norwegians have always spent a lot of money on footwear, and many of them appreciate quality. Hence we have shops like Skomaker Dagestad in Oslo who sell huge amount of welted shoes, and brands like Red Wing are seen everywhere on the streets.

Which Nordic shoe brands would you like to highlight?

— Today, there’s lots of great brands started by people in Scandinavia. I’d like to start with two that were part of the super trunk.

— Skolyx, who I work for as my regular everyday job, have its own brand of affordable Goodyear welted shoes, made on Mallorca. Everything from dressier oxfords to more casual derbys and loafers, a lot of shoes for the price at just above €200. At Skolyx, we also work close with the brand TLB, which we have developed a new range called Artista with. We’ve really pushed the bar for what you get in the midrange price segment, with super slim waists, real leather heel stiffeners and so on. 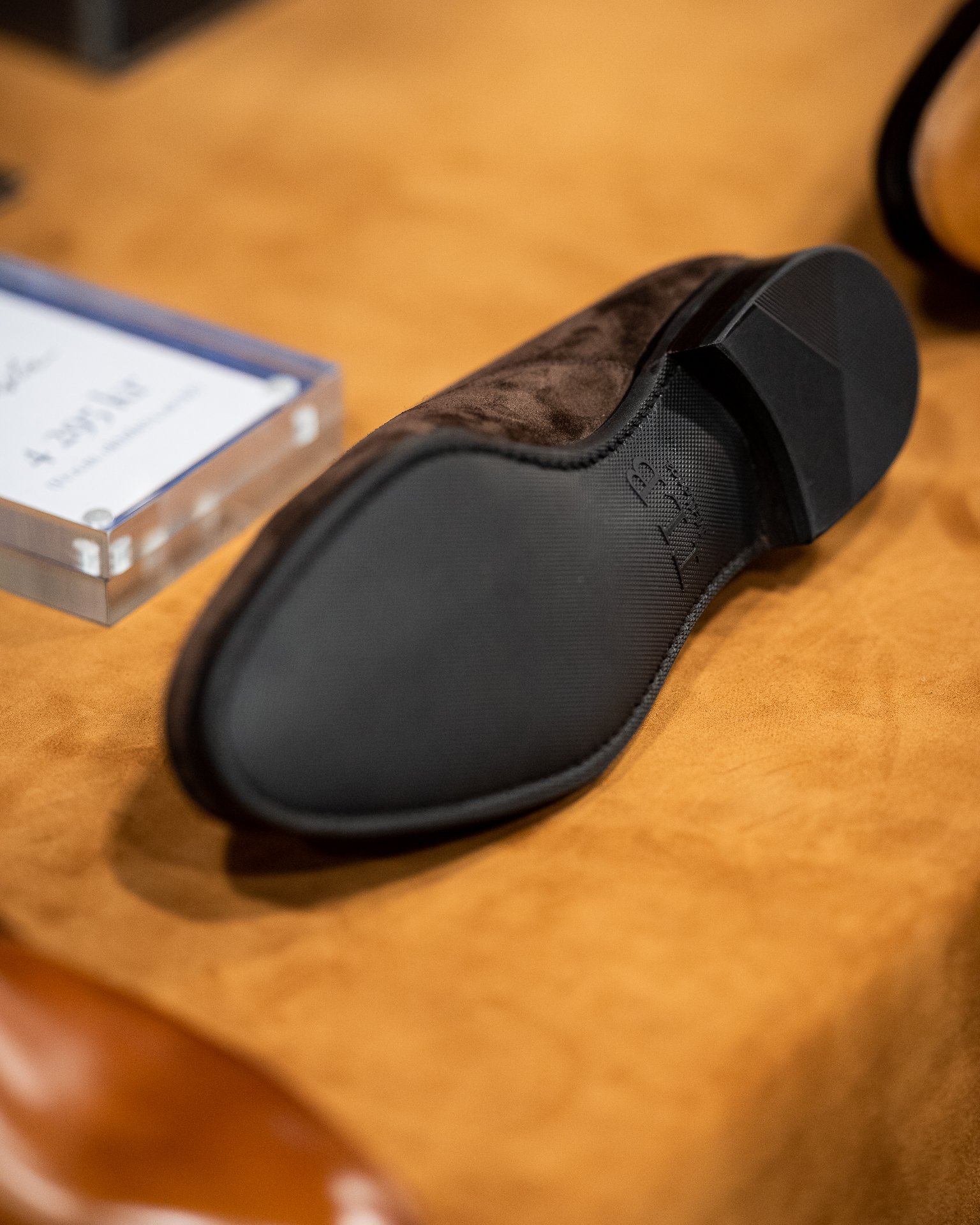 — Dagestad by Santari is another really interesting offering. Hand welted shoes with superb finishing, made in a small two-man workshop in the Tokyo shoemaking district Asakusa. Pretty much as good as it gets in the RTW/MTO world, priced at about €1200. They have a slightly wider forepart of the shoes to avoid having the toes being cramped, which makes them really comfortable, yet they’ve managed to keep an elegant look. 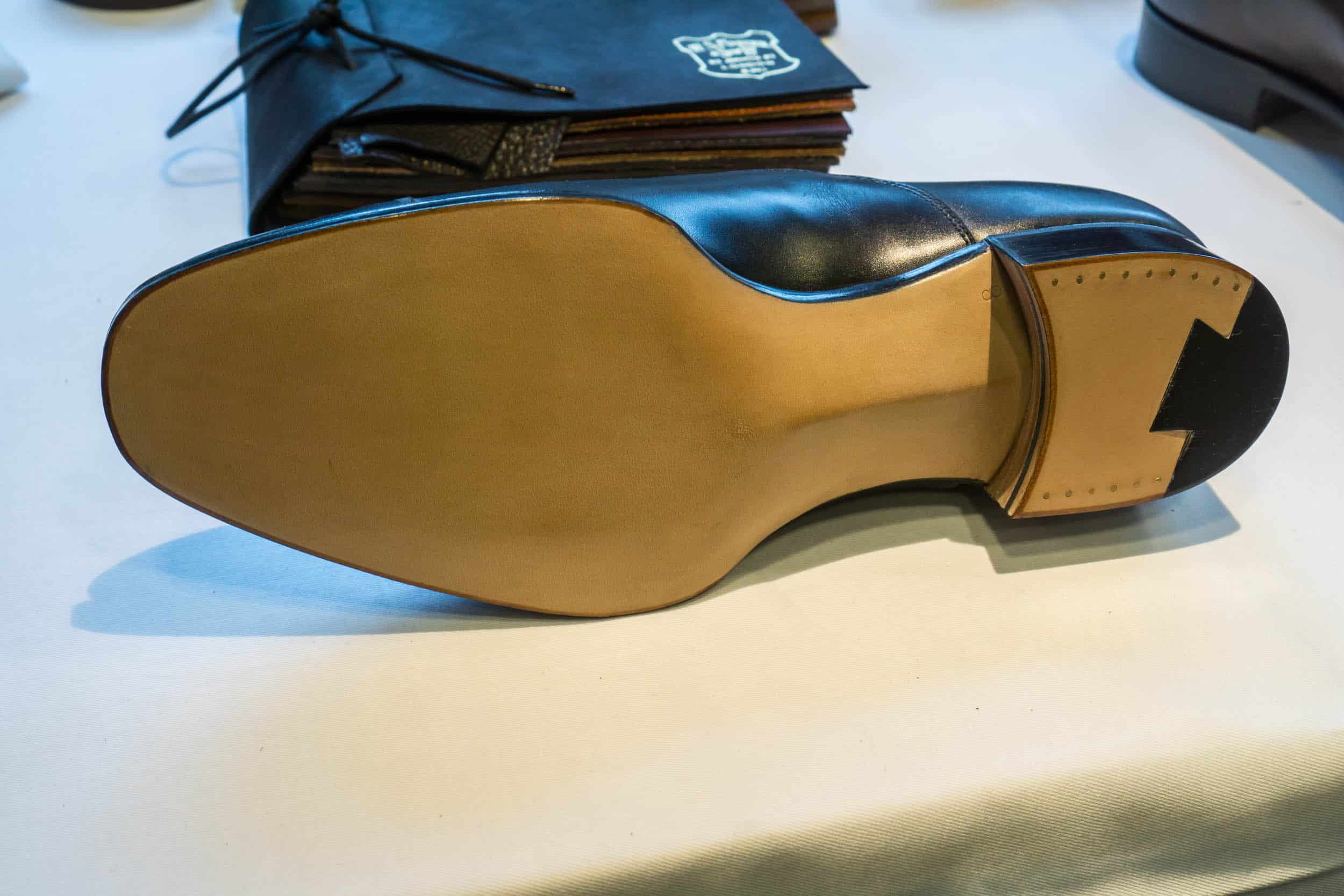 — Another brand I feel deserves to be mentioned is the Swedish store Skoaktiebolaget’s private label range Löf & Tung. Skoaktiebolaget has been one of the world’s most renowned multi-brand men’s shoe stores for several years now, and it’s a sign of where the industry is going when they launched their own brand. It’s solid midrange shoes with nice looking lasts and designs, with not least a lot of possibilities going Made to Order. 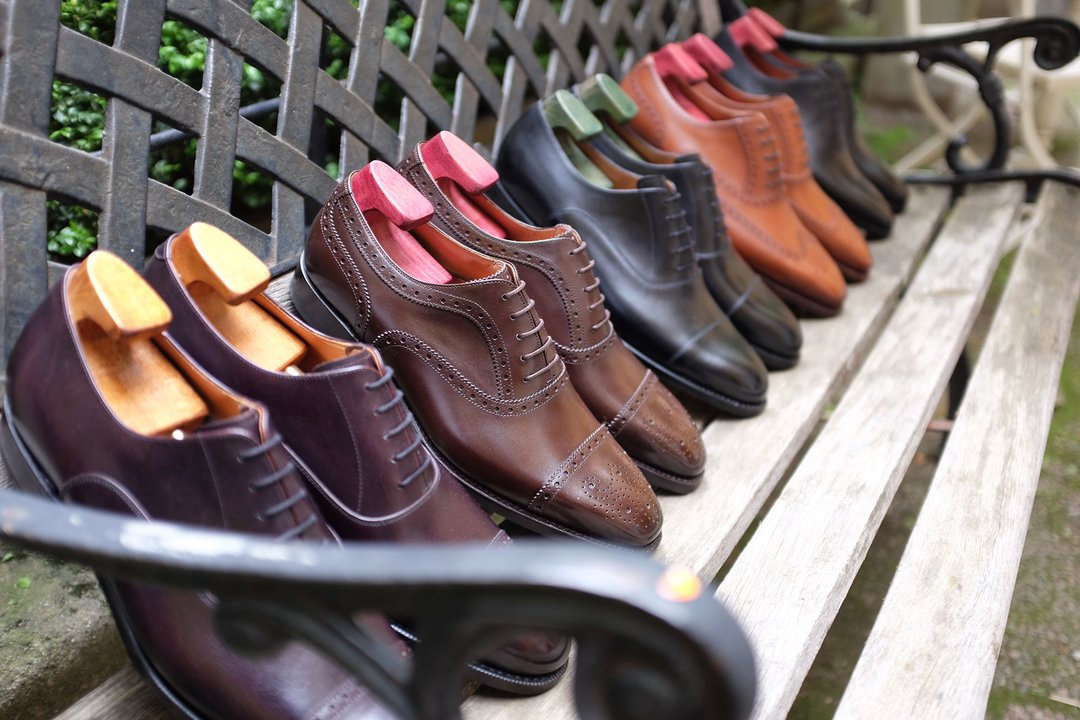 — We don’t have too many bespoke shoemakers up here in the north, but a few great ones are keeping the craft alive. One of them is the Swede Janne Melkersson, who runs the brand Melker Shoes & Boots. He has been working with shoes for over 50 years, the past decades out of his home in Hara outside Östersund. He both has a regular bespoke service, but is also famous for doing one-on-one shoemaking courses, where people from all over the world travel to learn how to make shoes by hand. I’ve spent a week there myself a couple of years back, a truly lovely experience. 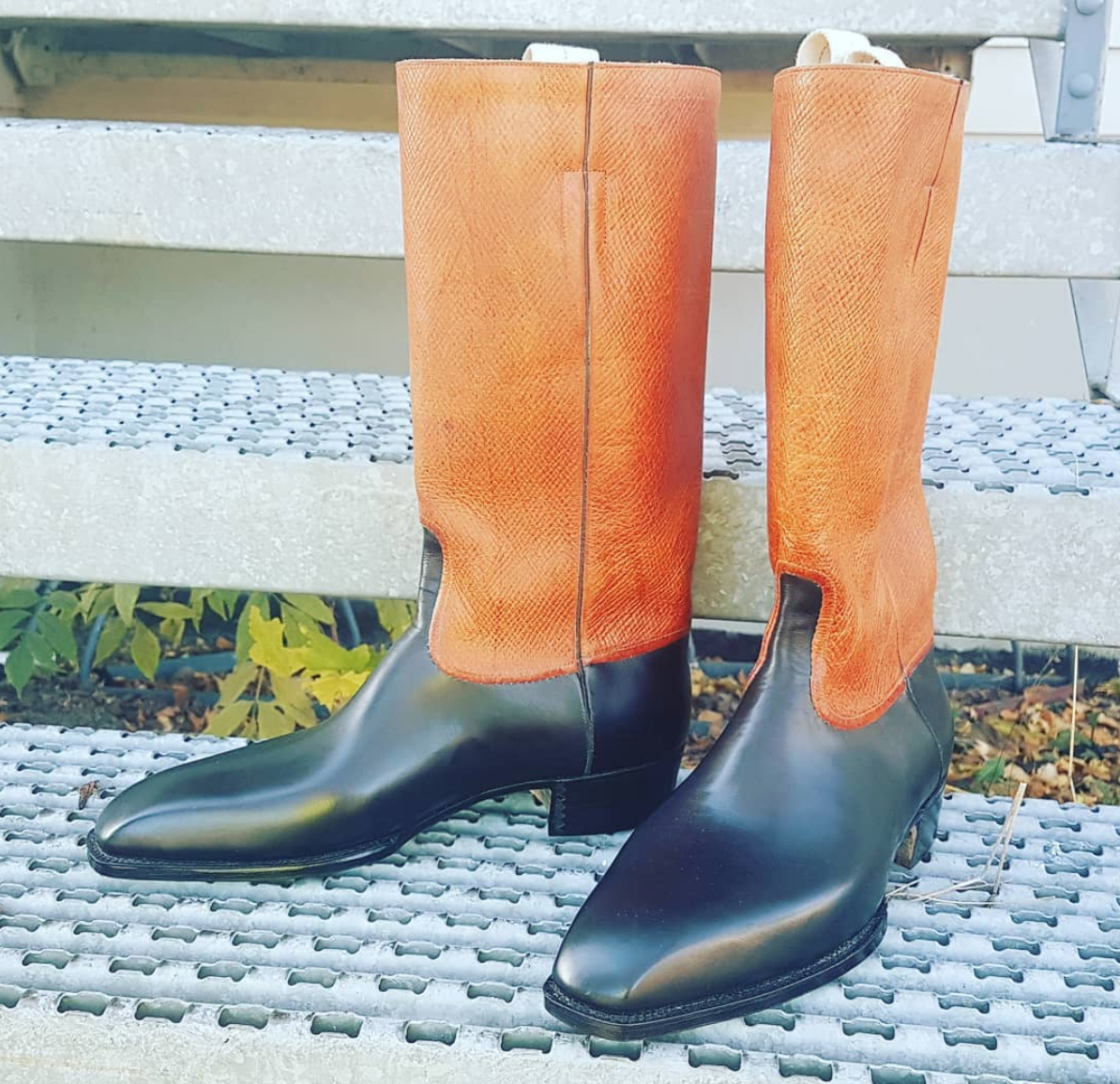 — Finally I would like to highlight Aurlands, a new brand based out of the Norwegian village with the same name, where they are reviving an old shoemaking tradition. The Norwegian shoe industry have been pioneering both constructions and models back in the days, like the ”Norvegese” construction or the split toe derby, but also the penny loafer. The first penny was made back in 1926 by the shoemaker Tveranger who lived in Aurland. Now the brand Aurlands have set up a new small factory producing penny loafers again on home turf, one of very few Scandinavian producers of high quality RTW shoes. 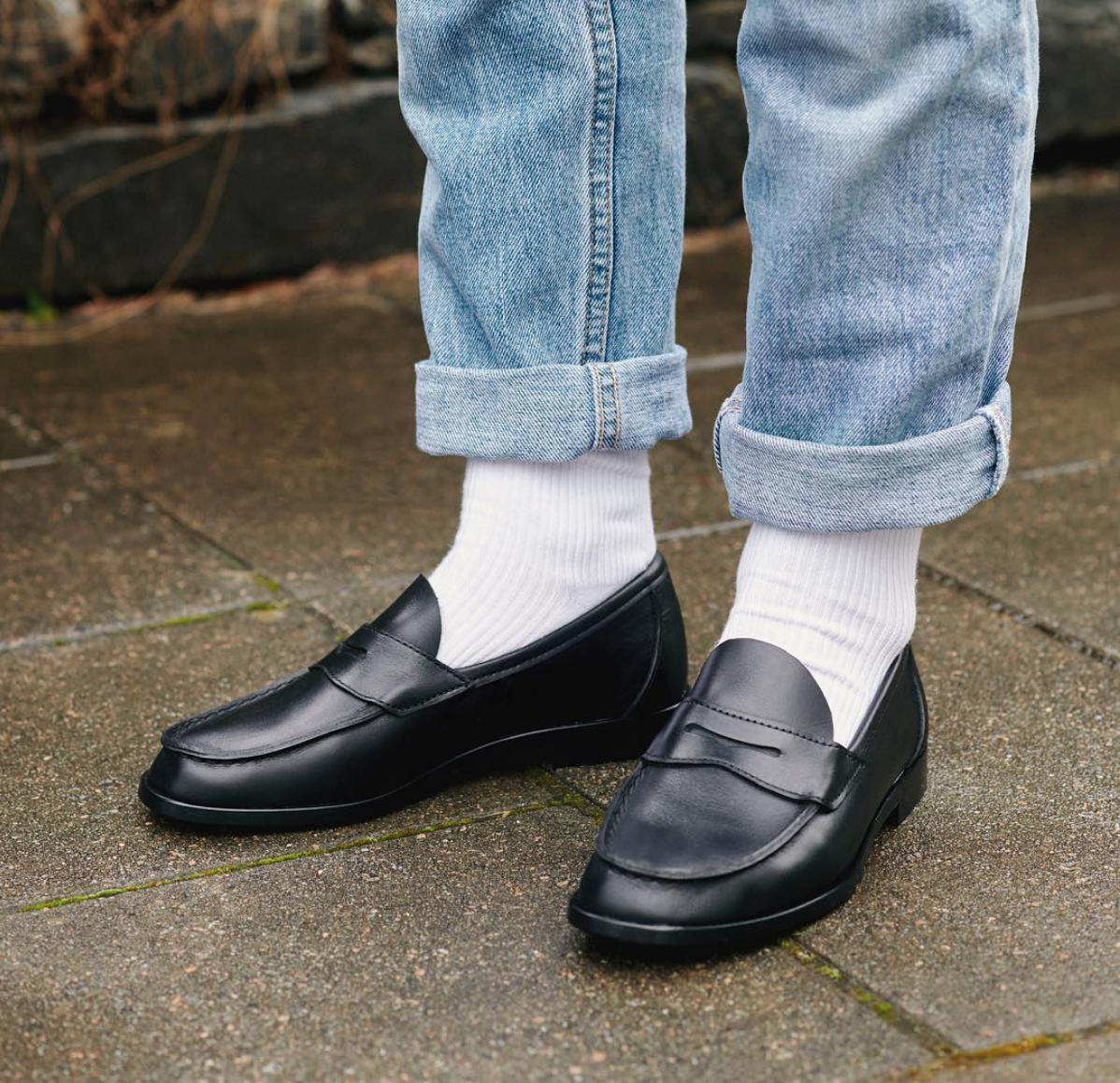 You seem to have quite a busy schedule. What else will we see from you?

— I have a lot of new episodes of the Shoegazing Podcast recorded, which I’m looking forward to getting out there. Also I’m looking at adding a new city to the line-up of super trunk shows, so apart from Stockholm and London we will also have an event in another European city next year. If I just find the time, there will also be super trunk shows in, for example, New York in the future. I have had a lot of wishes from people and partners who want to see me expanding the concept, but I need to sleep as well… One day.

Related: ”We aim to provide the best shoe shopping experience a man can have”